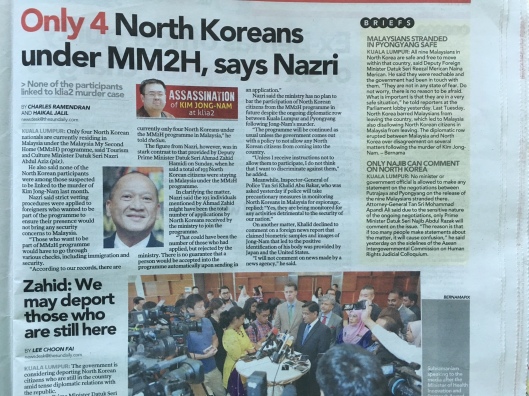 In just one day, the continuing confusion and conflicting messaging relating to the ongoing standoff with North Korea was aptly captured on a single page of a local newspaper. It suggests a disquieting level of disarray in the upper reaches of government at a time when the security and well-being of Malaysian diplomats and their families in Pyongyang are in question.

At the top corner of the page was a statement by Attorney-General Mohammad Apandi Ali that “no minister or government official is allowed to make any statement on the negotiations between Putrajaya and Pyongyang” due to its sensitive nature. He indicated that only Prime Minster Najib Tun Razak would be commenting on the issue because “if too many people make statements about the matter, it will cause confusion.”

Too many statements, too much confusion

That did not, however, appear to deter others from having their say, as was evident from other reports on the same page.

Deputy Prime Minister Zahid Hamidi and Tourism Minister Nazri Aziz publicly disagreed with each other as to exactly how many North Koreans are in Malaysia under the Malaysia My Second Home (MM2H) Programme. Zahid, who also oversees the Immigration Department, and ought to have access to the relevant data, had said that there were 193 North Koreans in Malaysia under MM2H while Nazri insists that only four are enrolled in the programme.

What does it say about interagency coordination if the Home Minister and the Tourism Minister cannot even agree on just how many North Koreans are here?

Arrest North Korean citizens while Malaysian diplomats are being held hostage in Pyongyang? How smart is that?

Zahid also intimated that thus far the government has yet to receive any official request from the next-of-kin to claim Jong-nam’s body. He then went on to add that “if there is a claim, we will adopt several approaches and obtain confirmation from the Attorney-General’s chambers on the handling of the remains.”

How one adopts several approaches when dealing with a single body was not explained.

Who speaks for the deceased?

Our Health Minister, in the meantime, whose role, if any, was confined to the autopsy, was reported, again on the aforementioned page, to have indicated that the government is giving two to three weeks for the family to claim the body before it decides on the next course of action. “We are told that he has wives and children. We hope that they respond and come forward to claim the body.” Continuing, he said that if the family does not come forward to claim the body, “we will address it as a government-to-government matter.”

To further add to the confusion, the deputy inspector-general of police announced the next day that the next-of-kin had in fact left it to the government to decide what to do with the remains of the victim.

We have our advantages

And finally, the Defence Minister, perhaps feeling neglected by the press, issued a fatuous statement declaring that while “we can’t fight a country like North Korea which focuses so much on defence assets … we have our advantages which will allow us to move forward in any eventuality.” Reassuringly, he also “ruled out the possibility of both countries going to war as negotiations have been positive.”

Was war with North Korea ever even a remote possibility? As well, it is hard to fathom what negotiations he was even referring to seeing as none have as yet taken place (according to the Prime Minister).

Both Malaysians and foreigners alike reading all these reports must be shaking their heads in utter bewilderment at the way our government works.

Leaving aside the sometimes asinine nature of these remarks, don’t they realize that nine of our own diplomats and their families are being held hostage by a reckless, ruthless and unpredictable regime and that in such a situation quiet diplomacy must be given the time and the space to go forward?

With the well-being of our citizens at stake, they should know better than to try to score brownie points with unnecessary if not silly remarks.

Most of these issues – the disposal of the body, the fate of North Korean citizens in the country, the future bilateral relationship – are undoubtedly going to feature in the negotiations between Wisma Putra and the North Korean mission here; it only makes Wisma Putra’s job that much harder if our ministers keep jumping in this way.

How not to manage a crisis

Of course, it may be that the remarks of our ministers were somehow misreported. The general decline in professional standards that is increasingly evident across the board naturally affects the media as well. However, having witnessed too many silly statements on this and other matters over the years from our senior officials, it is more than likely that the fault lies with the officials themselves.

Whatever it is, somebody ought to write a book on how not to manage a crisis based on Malaysia’s continuing response to our very own North Korean saga.