The diplomat who came in from the cold

“And I became the envoy of a lost kingdom, ambassador of the best country we never had.”

(Full disclosure. Dennis Ignatius and I are friends. Although we may disagree on a range of issues, we understand that Malaysia needs to change. Our last protest against the Umno hegemon found us walking together with other like-minded individuals for the Bersih march in Parliament protesting the redelineation exercise carried out by the former regime.)

BOOK REVIEW | I wrote the following as a blurb for Dennis’s book ‘Diplomatically Speaking’ – “Mr Ignatius dissects the Malaysian political landscape with a skeptical if emphatic gaze, borne of years of experience in the Malaysian Foreign Service. More than just a collection of essays, this book is a historical document by a professional whose clarity of purpose is evident from the very first chapter.”

The chapter that best exemplifies my blurb is the chapter dealing with the vigilantism of Papagomo who assaulted a migrant worker because he claimed that the worker sexually harassed a family member of the controversial blogger. In this chapter, Dennis stitches together disparate narratives, our apathy, the nonchalance of the state, the morality or lack thereof of vigilante acts, the indifference of a foreign embassy with regards to one of their own but most importantly, the vagaries that is life for a migrant worker.

Any other writer would have just focused on one topic but not Dennis. For this former diplomat, nuance is important. It would be easy just to assign blame to one party and move on. It would be easy for the reader and definitely for the writer. The writer gets to preach and the reader get a good dose of confirmation bias. This incident tells us something about our country and for Dennis, what it tells us is that there is something very wrong with us.

Back up a moment. In the foreword to this book, Dennis writes – “I still remember that day (4th September 1972) when I walked through the palm-lined road to Wisma Putra to report for duty. My heart was bursting with pride – at last I was going to get the opportunity to serve my country, to live my dream, to help write in some small way the future history of our nation.”

Civil servants from the old school look upon service as a calling. Those were the days when serving your country meant something. It meant sacrifice, but more importantly, a willingness to understand the faults of your country and how to correct those faults. In the foreword, Dennis makes it clear that the country going down a dark path by successive regimes was initially ignored by him as an anomaly.

Then a pattern formed and the diplomat understood the folly of patience and inaction. Most former civil servants can relate to that. So what did Dennis do? He began to write. As the country got deeper into the mess, Dennis found that avenues for public discontent were shrinking.

Malaysiakini readers know of him through his comments pieces which not only earned the wrath of the former Umno state but hate mails from former civil servants who disagreed with his position. All these attacks were always upon his character and not on the points he raised. Former establishment types pointed to the fact that Dennis served under regimes that were the cause of this country’s mess. I can relate to that. I, too, served under regimes that brought this country to where it is. 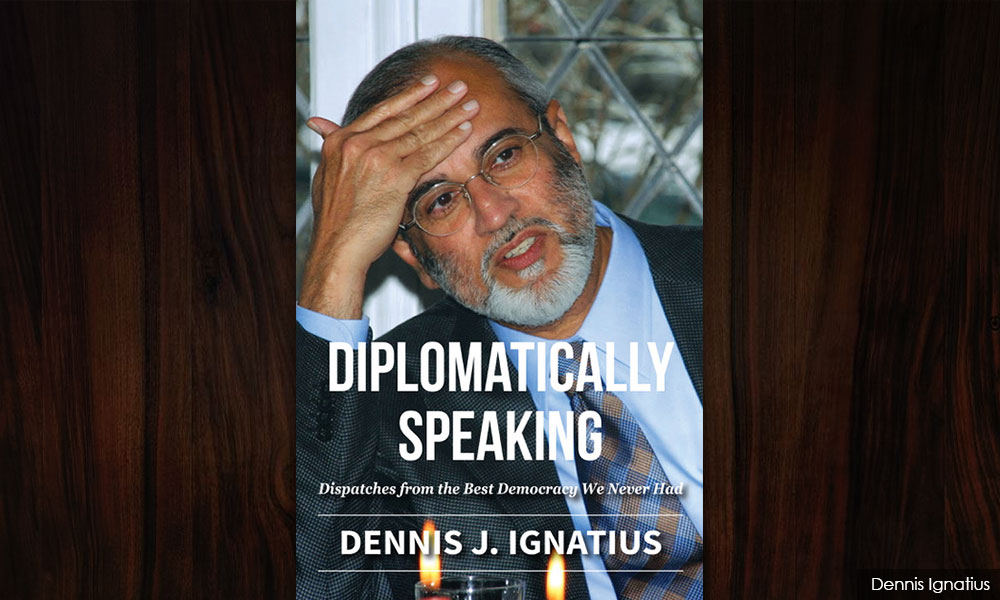 In dissecting the visit of US senators John McCain and Joe Lieberman in 2012, Dennis accurately points to the absurdity of their statements and the problem of international hegemons constructing narratives of “moderate” Muslim nations to further economic interests.

Here is a fascinating bit from that chapter – “I recall, as well, a meeting with then Secretary of State Colin Powell in mid-2001 at the State Department in Washington, D.C. Much to the chagrin of our foreign minister, Powell began by taking us to task on human rights and anti-Semitism.

“However, to our minister’s relief, Powell quickly shifted track and then excitedly went on to talk about the sale of the latest American fighter jets to Malaysia. It was immediately clear that he had raised the issue of human rights and anti-Semitism purely for the record, and without conviction.”

It is this kind of insider perspective that should give Malaysians an inkling into how the world operates not so much from a geo-political standpoint but from a Malaysian who views public service as a calling. This is invaluable because in a post-Umno political landscape, it is important that the old way of handling international relationships changes but the question is, will it?

In a fascinating chapter – ‘Does Malaysia need democracy?’ – written in 2012, Dennis disagrees with current Prime Minister Dr Mahathir Mohamad’s speech when accepting an honorary professorship by the University of Santo Thomas where the old maverick pointed out the weakness of democracy and “we should not put too much stock in democracy to solve our problems.”

Dennis neatly demolishes the arguments put forward by our now reformed prime minister and neatly summarises how democracy and good governance can solve our problems. This is a fitting way to end this review and a reminder of our long work ahead.

“In the end, when it comes to governance, the lessons of history over the last few centuries are simply these:

▪ First, people are, on the whole, better off governing themselves; when they surrender this right to the wise men who claim to know what’s best for the rest, they invite disaster upon themselves and their nation.

▪ Second, universal values of freedom, equality and justice are an important prerequisite for progress and prosperity. It is also morally right and reflects our highest and noblest aspirations. We can argue about details but we must never compromise on the principles.

▪ Third, our best hope rests not in the infallibility of great leaders but in the sanctity of great institutions – a fairly and freely elected parliament, an independent judiciary, an accountable and non-political police force and civil service, and a free press – rightly founded upon just laws.”

S THAYAPARAN is Commander (Rtd) of the Royal Malaysian Navy.