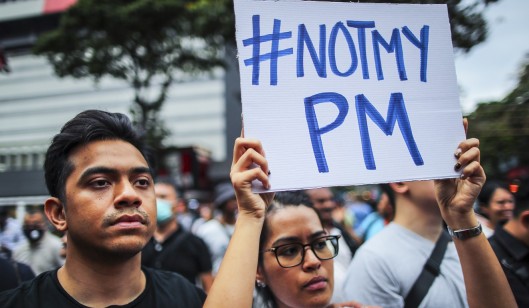 Seeing the way state governments are falling to Perikatan Nasional (PN) and the way some former Pakatan Harapan (PH) politicians are behaving these days must surely cause Malaysians no end of angst and disgust. We knew, of course, that our politicians were far from perfect but who would have thought they could sink this low.

Not so long ago, many of these same politicians descended upon our towns, our neighbourhoods and our community halls promising that they would be different from the corrupt and abusive regime they were seeking to replace. They said they shared our revulsion of UMNO-BN and their horrendous record of corruption and mismanagement. They said they understood our anger at the abuse of power, our distaste for anti-democratic legislation. They acknowledged that racism and extremism were killing our nation and had to stop. They said they wanted something better for our nation.

True, PH had its difficulties; it could have done a better job. And yes, mistakes were made. None of that, however, can justify the decision to abandon PH and join forces with UMNO-PAS or participate in something as perverse as PN. Certainly, nothing can justify handing power back to the corrupt regime that the voters themselves so clearly rejected at the polls.

Prime Minister Muhyiddin and his treacherous cohort can pretend all they want that they acted with the best of intentions, hide behind the cloak of patriotism or pose as defenders of race and religion but there’s no escaping the fact that they’ve broken faith with the voters. By their actions, they have shown themselves to be entirely unprincipled, dishonest and unworthy of the office they were elected to.

What is worse, having come to power on the promise of reform, they are now leading Malaysia down a dark road that might leave us even worse off than before. It is unforgivable.

The decision to convene parliament only long enough to hear the speech from the throne, for example, makes a mockery of our democracy. Fearing the verdict of parliament, Muhyiddin has moved to silence it. It’s an abuse of executive privilege, a scam to avoid parliamentary accountability and oversight, a rejection of the will of the people in parliament assembled.

It’s a sure sign that this backdoor government does not intend to play by the rules, that it holds nothing sacred, that it cares little for its moral legitimacy or what the people think. All Malaysians ought to be deeply offended and alarmed by his actions.

It is no less stunning too that the same people who once waxed lyrical about corruption and good governance are now sanctioning an iniquitous system of cronyism and patronage by giving away GLC and other appointments to their own members on a scale not even seen under UMNO-BN.

It legitimizes the plunder of government positions; it endorses the use of public office for personal gain; it condones the mass manipulation of the machinery of government for political advantage. In a single stroke, all the progress we’ve made as a nation in advancing the cause of good governance has been negated. It can only go downhill from here.

And let’s not forget as well that Muhyiddin’s own claim to integrity in politics derived from his apparent willingness to stand up to Najib and UMNO on the 1MDB scandal; what does it say of the man that he should now think nothing about finding common cause with those same leaders?

Devoid of political legitimacy and with uncertain support in parliament, Muhyiddin is now totally dependent upon a clutch of unprincipled men intent only on furthering their own ambitions.  To survive, he will have to give more and more of the shop away.

The more he compromises, however, the weaker he will become, a puppet held hostage by the very parties that he, as part of PH, defeated in the last election.

Only time will tell just how much Muhyiddin will have to give away for the privilege of sitting in Putrajaya. With many UMNO leaders facing serious jail time on corruption-related charges, it would be one area to watch closely. The outcome of a recent high-profile 1MDB- related case is certainly not encouraging. Already Malaysians are fearing the worst.

In the meantime, the nation will pay a high price for the treachery that has been perpetrated upon the electorate. Our national psyche has been deeply wounded. Public confidence has been shaken. Disenchantment and cynicism are at an all-time high. People have lost faith in our national institutions and in our elected officials.

Worse still, there is no one left with the moral authority to provide the kind of leadership we need in this desperate hour, no one to look up to, no one to restore trust in our political system or confidence in our future.

Indeed, the slew of accusations now being traded between former leaders about corruption, nepotism and malfeasance in office has left Malaysians with the dreadful sense that their leaders are all untrustworthy; no matter who you vote for you end up with crooks out to feather their own nests.  We truly have become a kleptocracy in every sense of the word. It is a sad commentary on where we now stand after some six decades of nation-building.

Frustratingly, other than watch in helpless resignation and seethe in quiet anger, there’s not much that the public can do given all the Covid-19 restrictions on mass gatherings. But someday, all these politicians are going to have to come back to the people they betrayed to ask for their vote. Till then, we watch and wait. And remember.

“If your government keep making big mistakes and in return you keep supporting your government, then you are the biggest mistake for your country!” ― Mehmet Murat ildan