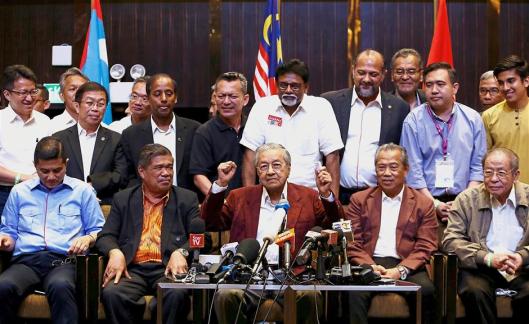 May 9th will mark two years since Pakatan Harapan (PH), against all odds, swept to victory. A party that did not expect to lose was swept from power by a coalition that didn’t think it could win.

What giddy days they were! To say we were jubilant would be an understatement. The excited crowds outside the gates of Istana Negara waiting for Dr Mahathir Mohamad to be sworn in as prime minister will forever be etched in the memories of those who were there. It made all the years of effort – including risking arrests to attend those Bersih rallies, training as election monitors and campaign workers, and going out of our way to vote – worth the while. Together, we took back the government from the hands of unscrupulous, immoral and corrupt politicians.

For one moment in time, we were united by a shared hope that at last Malaysia would be able to embrace its destiny as a united, prosperous and democratic nation. Not since Merdeka had there been such a national outpouring of pride, hope and excitement.

But it was not to be; our brief tryst with spring ended as abruptly as it began.

Many factors, no doubt, contributed to the fall of the PH government; certainly, the bitter rivalry between Mahathir and Anwar Ibrahim dominated much of the news. Ultimately, however, it was the race factor more than anything else that proved destructive.

Ketuanan Melayu ideologues from across the political spectrum – PPBM, UMNO, PKR and PAS – felt deeply threatened by the prospect of having to share power, even minimally, with the non-Malays. Unsurprisingly, the DAP which surged to new heights following GE14 quickly became the “Great Satan,” the embodiment of an existential threat to the Malays. If the whole concept of power-sharing was to be aborted, the DAP had to be discredited and removed from government.

It is no secret that since May 1969, we’ve always had a multiracial government in name only; absolute power remained in the hands of UMNO which ruled primarily on behalf of one community. MCA, MIC and Gerakan were never more than bit players, there simply to lend credence to the lie that multiracial politics and national unity were alive and well.  It allowed UMNO, masquerading as Barisan Nasional, to rule as a multiracial government while pursuing an essentially race-based agenda.

GE14 upended that construct. The bitter, very personal battle between Mahathir and Najib Tun Razak divided Ketuanan Melayu ideologues along with much of the Malay polity. So bitter was the feud with Najib that Mahathir, the architect of the Ketuanan Melayu agenda, was even willing to find common cause with the DAP and his other bitter rival (Anwar) to bring down Najib.

Malay disunity – as Mahathir himself later claimed – allowed the non-Malays to win a record number of seats in parliament. It still left the Malays in an unassailable position given their majority in parliament, the civil service, the armed forces and police and in almost every other area of national life, but it did bring a more balanced representation to parliament at least.

While many considered it a positive development, Ketuanan Melayu ideologues, long accustomed to seeing politics as a zero-sum game, saw the outcome of GE14 as a disastrous setback. To them the very idea of power-sharing was unacceptable, a direct challenge to the Ketuanan Melayu agenda and all it stood for.

The rejection of power-sharing was clearly evident in Malay political discourse post-GE14.   Incendiary statements like “Malaysia is for Malays”, non-Muslims ought not to be given senior positions in government, Malay rights and culture were being undermined, the position of the Malay rulers was being challenged, non-Malays were disrespecting the Malays, were aggressively thrown into the narrative.

At the same time, non-existent threats from Communists, Christians and Tamil Tigers were deliberately played up to give the impression that the nation was facing a dire and imminent threat to its very existence. Reality didn’t matter; the objective was to manufacture a crisis of confidence in the PH government.

The underlying message was clear: the Malay community alone had the exclusive, God-ordained right to rule Malaysia. “Immigrant” communities – the pendatang – could remain for so long as they did not challenge Malay rule or even aspire to be equal partners in the governance of the nation.

It was not a novel idea. In his seminal treatise The Malay Dilemma written almost 50 years ago, Mahathir opined that “Malays are the rightful owners of Malaya, and that if citizenship is conferred on races other than the Malays, it is because the Malays consent to this. This consent is conditional.”

Such a view was, fundamentally, a complete repudiation of the Merdeka agreement which envisaged shared citizenship and joint responsibility for the governance of the nation within a secular, democratic and constitutional framework.

Ketuanan Melayu ideologues had long complained, albeit erroneously, that the British had done the Malays a great disservice when it forced them to accept non-Malay citizenship and participation in the political process in exchange for independence. When they saw an opportunity to correct, what was in their mind a historic injustice, they jumped at it.

As pressure grew for Anwar to take over from Mahathir (as per the PH succession plan), Ketuanan Melayu ideologues – united by their common disdain for sharing power with non-Malays – were galvanized into action. To them Anwar was unacceptable because, as Mahathir himself complained, he was not sufficiently committed to the Ketuanan Melayu agenda. His leadership of a multiracial coalition, his constant calls for unity, tolerance and inclusiveness was a bridge too far for the right-wing members of his own community.

Mahathir himself had, of course, been plotting and planning for months to create a more Malay-centric government both to advance his Ketuanan Melayu agenda as well as to stymie Anwar (whom he personally loathed). His plan was to entice UMNO and PAS parliamentarians (sans some of their leaders) to join his own stable of parliamentarians to form a new Malay unity government.  What he didn’t count on was that Muhyiddin, who did not share his scruples about tainted UMNO leaders, would beat him to it.

Whatever it is, the end result was a seismic political shift no less significant than May 13th. The ‘Sheraton Move’ effectively nullified the results of GE14, disenfranchised the non-Malay vote, curtailed power-sharing with non-Malays and re-established absolute Malay hegemony.

The Malaysian spring, along with the reformasi agenda, is now over. Will a harsh winter follow?