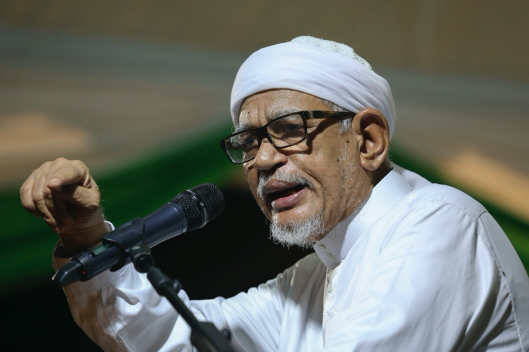 There’s a mysterious letter, purportedly written by the newly minted Middle East special envoy, Hadi Awang, that’s making the rounds. It is something of a mystery  because though it carries Hadi’s signature, the man will neither confirm nor deny that it is his. His party too has gone strangely quiet, steadfastly refusing all comment on the matter.

Given the absence of a denial, it would be reasonable to conclude that he is indeed the author of the letter to Middle East leaders and that he and his party are now deeply embarrassed that it has become public. They ought to be.

The letter – a long, rambling and convoluted missive – written on the day he was appointed special envoy, essentially sought to justify Hadi’s involvement in helping to overthrow the elected government of Malaysia and bring in a backdoor government. It is, by all counts, a pathetic, self-seeking, self-serving attempt at whitewashing his own shameful conduct in the whole affair.

That he saw fit to push his jaundiced views about our domestic politics unto the global stage shows just how unfit he is to be special envoy.

Playing to Middle East politics, he disingenuously sought to posit developments in Malaysia as part of a global conspiracy against Islam claiming that an unholy alliance of Christians, Jews, freemasons, liberals, non-Malays and western governments had come together to undermine Islam and Islamic governance in Malaysia. He then unabashedly went on to imply that he heroically stood up to them as defender of the faith.

No doubt aware that Dr Mahathir Mohamad and Anwar Ibrahim are well-respected figures in the Muslim world, Hadi felt obliged to explain why he had to move against them. Mahathir, he insinuated, was a weak-willed leader who allowed himself to be used by the non-Malays as “a stepping stone to achieve power through treachery.”  Anwar he dismissed as a flawed personality too obligated to non-Muslims to be trusted.

Whatever their domestic opponents may think of them, both Mahathir and Anwar are highly respected in the Islamic world. Hadi, by comparison, is relatively unknown. About the only thing he can brag about is his vice-presidency of the International Union of Muslim Scholars, an organization that the Saudis and their allies deemed a terrorist grouping a couple of years ago. If he thinks he can supplant Mahathir or Anwar as Malaysia’s interlocutor with the Islamic world, he is more delusional than we thought.

It will be interesting to see how Mahathir, in particular, responds to Hadi’s characterisation that he was a weak-willed leader who allowed himself to be manipulated by the non-Malays to the detriment of Islam and the Malays.

In the meantime, Hadi himself has some explaining to do given that he grovelled before Mahathir at every turn, even offering to table a parliamentary vote of confidence in Mahathir earlier this year. And didn’t Hadi recently praise Dr Mahathir as an “exemplary statesman”? Clearly, in condemning Mahathir, he only exposes his own hypocrisy and duplicity.

Unsurprisingly, Hadi also injected into his letter his own deeply-held prejudices about non-Malays and non-Muslims, blaming them for scheming to undermine both the Malays and Islam. He also reiterated the standard Ketuanan Melayu allegation that they ought to be more grateful and appreciative that they were given citizenship.

When Hadi was appointed special envoy, his supporters justified his appointment by suggesting that he would be able to use his new position to strengthen diplomatic relations, attract investments from the Middle East and even obtain help for the country in the fight against the coronavirus pandemic. Hadi himself said he would use his appointment to promote an “agenda of unity and universal peace.”

The March 22nd letter should now dispel any notion that he is capable of rising above petty politics and bigotry to serve the wider interests of the nation.

Envoys are supposed to represent the King and speak on behalf of the government and people of the nation. By using his official position to slander his political opponents and demonize Malaysia’s minorities on the world stage, he has done a great disservice to our nation. But that’s what happens, I suppose, when a backdoor government appoints a backdoor envoy to represent it.