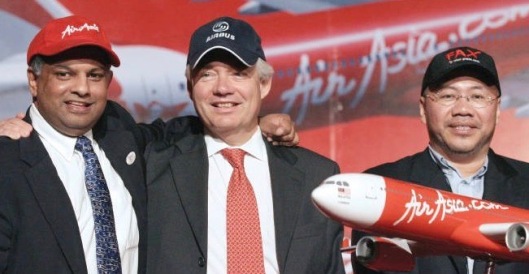 It is being reported that AirAsia co-founders Tony Fernandes and Kamarudin Meranun have now been “cleared” of any wrongdoing in relation to the Airbus kickback scandal.

BDO Governance Advisory Sdn Bhd, a company hired by AsiaAsia to conduct an “independent” review, concluded that AirAsia has “a robust aircraft procurement process” in place and that the acquisition of aircraft was “justifiable and at prices favourable to the company.”

The scandal, it may be recalled, became public after UK court documents revealed that two AirAsia executives were paid RM204 million by Airbus in exchange for sales contracts. It was part of a wide-ranging investigation into the way Airbus secured contracts through bribery and kickbacks. The UK judge summed it by saying, “The seriousness of the criminality in this case hardly needs to be spelled out. As is acknowledged on all sides, it was grave.”

Airbus, in an admission of guilt, subsequently agreed to pay fines amounting to RM17 billion over the next three years to avoid prosecution.

In response to public pressure, both Tony Fernandes and Kamarudin Meranun temporarily stepped down pending an inquiry. Now that they have been “cleared” they have both resumed their positions with the company.

The public is now left to ponder what seems like a contradiction of mammoth proportions – In the UK, Airbus has admitted that it paid millions to AirAsia executives in exchange for sales contracts and agreed to pay fines amounting to billions of ringgit; in Malaysia “an internal investigation” (as some media reports are calling it) finds no evidence of wrong-doing and everything is back to normal.

Are we to conclude then that what is considered seriously criminal in the UK is no more than “robust procurement” in Malaysia?

It brings back memories of the 1MBD affair – investigations by several countries found clear evidence of corruption and money-laundering, assets were seized and prosecutions initiated  but in Malaysia the authorities insisted that there was no crime to investigate and no criminals to apprehend.

In the light of the astonishing allegation about kickbacks that were revealed in UK courts, shouldn’t AirAsia be held to a higher level of accountability? Can companies accused of wrongdoing escape proper scrutiny and investigation by simply hiring a private company to investigate their actions?

Before she resigned as MACC chief commissioner Latheefa Koya promised to thoroughly investigate allegations of wrongdoing by AirAsia. In the interest of transparency and corporate accountability, shouldn’t the MACC be allowed to complete its investigation before anyone is cleared of wrongdoing?

How the new administration of prime minister Muhyiddin Yassin handles this affair will also give us an indication of just how serious he is about tackling corruption and improving corporate governance. Personally, I’m not holding my breath in anticipation.