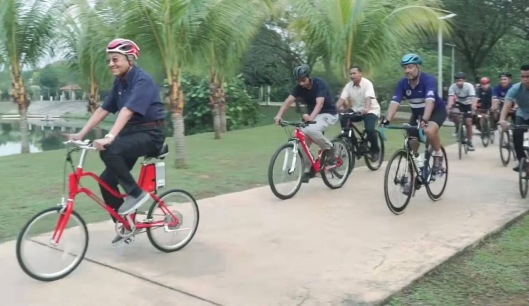 It’s hard to understand why they are still holding out hope that Dr Mahathir will come riding in like a knight in shining armour to save the day. Hasn’t he done enough damage to PH already? Even now, he seems to want PKR without Anwar and PH without any commitment to their manifesto.

It’s time for PH leaders to cut loose from Mahathir once and for all. He’s become too unpredictable, too much of a liability. It’s not past him to ditch them again if he finds it politically expedient. And even if he does miraculously help them regain power, can he be trusted to stay faithful to the PH cause?

Besides, Amanah and DAP leaders might be prepared to trust Mahathir but it is far from certain whether Malaysians will ever trust him again. That ship has sailed. There’s too much water under the bridge to go back to the pre-GE14 halcyon days.

We must now start looking to the future. There’s still time to organize for GE15.  There’s huge voter resentment against Muhyiddin and all the others who betrayed our vote; this could serve PH well. Malaysians will rise to the challenge once more; they have no other choice if they want to save Malaysia from the crooks, kleptocrats and extremists.

But there’s a lot of hard work that needs to be done between now and GE15.

Anwar, in particular, if he still harbours hopes of becoming prime minister, must now put in the hard work to win support, especially among Malay voters. He has to convince them that he can represent their interests, that he offers them the best way forward. It will mean months of hard slogging on the campaign trail beginning right now. He’ll have to go across the country and engage Malay voters like no politician has ever done before.

It won’t be easy. Mahathir and other Malay leaders have done such a great hatchet job on him that many – both Malay and non-Malay – doubt whether he is up to the task. It is unfair, of course, especially when you look at all those who point fingers at him, but it’s a political reality that he has to deal with.

If he cannot win the all-important Malay vote, he will have to admit his time has passed and allow someone else to take the lead. One thing this country doesn’t lack is young, talented and dedicated Malay leaders with a passion for democracy, tolerance and good government. They are there; they will rise to the challenge.

The DAP too has its work cut out for it going forward. Again, UMNO and PAS have done such a convincing job of demonizing them that there is widespread distrust for the DAP among the Malays in general. The DAP has its faults, to be sure, but the anti-Malay rap is not something they deserve.

They should have done more to counter UMNO-PAS propaganda, done more to win Malay support when they sat in government. Their partners too could have been more forthcoming in defending the party against many of the patently false and racist allegations that were levelled against them. It’s good that Amanah leaders are now speaking up in defence of the DAP but the damage has been done.

If the DAP ever hopes to be part of a winning coalition again, it must go back to the drawing board and work on a new strategy and a better message to improve its image among Malay voters. Until they do, they could be too toxic for any Malay leader to openly embrace, as sad and unfair as that may be.

The DAP has some incredibly talented and dedicated leaders and it has a strong organizational structure; it shouldn’t be an impossible task for the DAP to reinvent itself between now and GE15 and come out stronger, better prepared and more widely supported.

As for Amanah, they have shown themselves to be a party of principled men and women. Many dismiss Amanah president Mat Sabu as unsophisticated but there’s no doubt that he’s one of the most honest men in politics today. And he can connect with ordinary Malays in a way that few can. He can be a tremendous asset in the battle to win the hearts and minds of Malay voters. He too should go across the country to engage voters once more.

Whatever it is, it’s time for PH to get over the fact that it has lost power. There’s no point crying over spilt milk. They should just learn from their mistakes and move on. The battle for a better Malaysia and for reformasi is not over; it’s just beginning. With courage and determination and with the support of the people, PH will rise again. And they will do it without Mahathir this time.