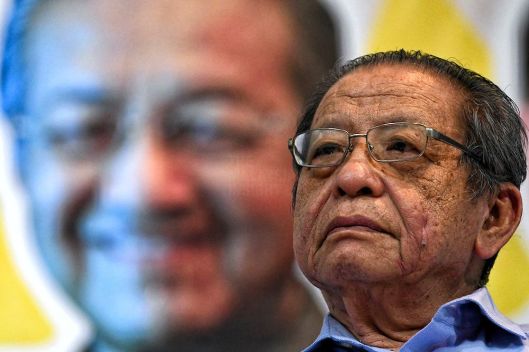 After fighting for and dreaming of a place at the table for years, the DAP is now discovering that being part of the government, at least part of a Mahathir-led government, can be a bittersweet affair. With frustration growing among its grassroot supporters and consensus breaking down within the party’s top leadership, pulling out of the government is no longer as unthinkable as it might have been 19 months ago.

Before GE14, Dr Mahathir was, of course, more than happy to be seen with DAP leaders, enjoying their enthusiastic support, and praising them for their contribution to the nation. He even went so far as to admit that he was wrong to demonize the DAP and expressed admiration for the way they upheld the national language in their meetings. Without a doubt, he would not be where he is today without the support of the DAP.

Back in power, however, his enthusiasm for them has waned. Suddenly, they have become a liability, a stumbling block to gaining wider Malay support, a competitor to be outmanoeuvred and brought into submission. In the face of blatantly racist attacks against them, including from within his own party, Mahathir has done nothing to defend them.

Not only has Mahathir frustrated the whole reform process that is critical to the DAP base, he has given them no face, no meaningful concessions, nothing to assuage their increasingly restless supporters. He seems entirely unconcerned that the DAP, more than any other PH party, is vulnerable on issues like the SOSMA arrests, UEC recognition and even Lynas, and seems content to leaving them twisting in the wind.

It doesn’t help as well that on the all-important education file, Maszlee Malik is behaving more like an ustaz each day than an education minister; fears are certainly growing among non-Muslims about his ultimate intentions. His latest ‘dakwah’ memo is the last straw. And yet, Mahathir continues to defend him oblivious to the tremendous carnage he is causing both to the PH brand and the education system.

Indeed, for Chinese and other non-Malay educationists, the PH government has been an absolute disaster; and for that too, the DAP will suffer.

The other thing that the DAP has had to contend with is a level of ugly racism and bigotry the likes of which our nation has never witnessed before. UMNO, PAS and a host of Malay NGOs have resorted to the most outrageous and egregious acts of racism and bigotry against the DAP imaginable.

The latest spate of videos accusing Lim Guan Eng (LGE) of using his position as finance minister to take away money from the Malays to give to the Chinese and allegations that the communists (code for the DAP and the Chinese) have taken control of the government, for example, are all part of a well-organized and systematic campaign to demonize the DAP.

Clearly, right-wing Malay groups are incensed that the DAP and non-Malays are now better represented in parliament and government. Willing to accept nothing more than token non-Malay representation in government, they are determined to frustrate the present political arrangement by any means possible.

What we are now seeing is the true face of the ugly racism that has long simmered under the surface of our politics. If anything, it has gotten worse under PH, largely because Mahathir has consistently declined to confront it.

Given this racist onslaught and Mahathir’s failure to come to their defence, the DAP is, to all intents and purposes, politically marginalized. They cannot initiate anything because it will be turned against them and the PH government. Anything they are involved in, no matter how good or how needed, will immediately be targeted and stymied.

Hammered from all sides

As a consequence, the DAP leadership is now facing huge political pressures both from within and without. They are at the table but powerless. They are in partnership with Mahathir at a time when the larger Chinese community is turning against him.

At the same time, the DAP itself is showing signs of the ivory tower syndrome. Its leaders are seen as arrogant, unwilling to listen and out of touch with grassroot sentiment. The sense of estrangement between the leadership and its support base is such that DAP leaders no longer command the same respect as they did before.

As a consequence, DAP grassroot members are in no mood to entertain pleas for patience or understanding.  Every time DAP leaders defend Mahathir, they get hammered on social media.

Clearly, the DAP strategy of trying to have it both ways – LGE on the inside supporting the government and Lim Kit Siang critical from the outside – doesn’t cut it anymore. They are damned if they do and damned if they don’t.

The DAP must now ask itself whether what they gain by sitting around the cabinet table is worth the price they are paying in terms of loss of support, whether staying in government helps or hinders their objectives. In the end, self-survival might demand a radical course correction.

Being outside has its advantages

Of course, there is a danger that leaving the government might precipitate a political crisis and perhaps lead to the creation of a Malay unity government. However, Malay political parties are themselves deeply suspicious of each other, cannot agree on leadership issues and do not share the same goals. Their common antipathy for the DAP may not, therefore, be sufficient to unite them in any kind of long-term relationship, especially if the DAP is no longer part of the government.

If the DAP makes clear that it does not intend to engineer the downfall of the PH, that it will remain PH-friendly in Parliament, especially when it comes to implementation of the PH manifesto, it could avoid a political crisis while giving itself more room to manoeuvre.

On other matters, given the number of seats they have in Parliament, they might be able to rein in the worst excesses of Ketuanan Melayu ideologues.

Equally important, departure from government would also take the wind out of the sails of all the racists out there who have long accused the DAP of manipulating the government from within to undermine Islam and the position of the Malays. It would show the nation that, unlike so many UMNO and PAS politicians who are willing to lie and manipulate their way back to power through backdoor arrangements and fake news, the DAP is willing to make real and principled sacrifices for the good of the nation.

And finally, with DAP out of the way, Malay political parties will be less able to hide behind racial and religious narratives to distract attention from their own failures.  Let’s see if parties like PPBM can come up with anything better than flying cars and black shoes.

Whatever it is, it should be clear by now that Mahathir is singlehandedly destroying PH and pulling the DAP down with it. Helmed by UMNO-minded PPBM ministers, PH is unlikely to deliver on the reform agenda; they were never enthusiastic supporters anyway. With all hope of Mahathir leading the nation to the promised land of Malaysia Baru gone, the DAP can explore new avenues to pursue the reform agenda or go the way of the MCA.