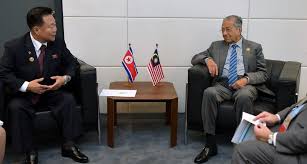 Is Malaysia’s foreign policy becoming increasingly erratic under the administration of Prime Minister Dr Mahathir Mohamad? That is a question that must surely come to mind following Prime Minister Dr Mahathir Mohamad’s statement while in South Korea that Putrajaya “is reaching out to North Korea” to discuss the normalization of bilateral relations and reopen the Malaysian embassy in Pyongyang, the North Korean capital.

The warming of relations follows Mahathir’s meeting with North Korean officials in Azerbaijan in October while attending the Non-Aligned Summit. A North Korean delegation quickly followed up with a visit to Putrajaya in mid-November. The indications are that Malaysian diplomats could be back in Pyongyang early next year.

Mahathir’s eagerness to re-establish normal relations with the Hermit Kingdom is puzzling for several reasons. Let’s start with the reasons why our diplomatic relations with North Korea were downgraded in the first place.

In April 2017, Kim Jong Nam, the half-brother of North Korean dictator Kim Jong Un was assassinated at Kuala Lumpur airport with a nerve agent banned under international law. Bukit Aman investigations quickly led to the door of the North Korean embassy in Kuala Lumpur. All attempts to interview some of the key suspects (including those not covered by diplomatic immunity), however, were rebuffed by the North Koreans who demanded that all the suspects be allowed to leave the country promptly.

In order to force Putrajaya’s hand, the North Korean government banned Malaysian diplomats and their families in Pyongyang from leaving the country. In other words, it held them as hostages in exchange for the release of all those wanted for questioning by Bukit Aman. Putrajaya quickly yielded and all the suspects were allowed to leave. Subsequently, all our diplomatic staff and their families were brought home and relations were downgraded. The North Korean ambassador was also declared persona non grata and ordered to leave.

Given the seriousness of the crimes that had been committed – the assassination at KLIA and holding our diplomats hostage – Putrajaya should have immediately broken off diplomatic relations with North Korea. Weak leadership, however, prevailed over common sense and the North Korean embassy was allowed to continue operating in KL, albeit at a lower level.

It is an unconscionable and outrageous decision that sends the wrong message to the murderous regime in Pyongyang and endangers the sanctity of all our diplomatic missions.

Deputy Foreign Minister Marzuki Yahya said, after meeting with the North Korean delegation earlier this month, that “the opening of our embassy will be subject to the assured safety and security of our diplomats.”

It’s a splendid example of the kind of nonsensical diplomatic blather that Wisma Putra engages in from time to time. The fact remains that there is no way we can assure the safety and security of our diplomats when dealing with a rogue regime that has a long history of disrespecting international law and the norms of civilized behaviour. Indeed, it would be criminal to send our diplomats back to Pyongyang.

Incredibly, Mahathir now appears to be even casting doubt on North Korea’s complicity in the assassination of Kim Jong Nam. Press reports quoted him as saying that talk that North Korea was behind the assassination was “suspicious.” They must be popping champagne in Pyongyang, no doubt.

I suppose we shouldn’t be too surprised seeing as he did the same thing with the MH17 investigation. Soon after the Dutch-led probe was released, Mahathir undermined it by saying that something was “not quite right,” that there was a rush to judgement. He offered no evidence of his own; he just diminished the findings of an international panel on nothing more than a whim. The Russians were, of course, delighted.

The government subsequently issued a statement promising that Putrajaya will “continue to pursue those who were responsible for [the] heinous crime and secure justice for the victims” but we all know that it’s just more of the kind of empty rhetoric that Putrajaya is famous for. 298 people perished when a Malaysian plane was shot down and this is the attitude we take.

Mahathir did the same thing when Suhakam concluded that the police were responsible for the abduction and enforced disappearance of both Raymond Koh and Amri Che Mat. His administration did nothing to investigate these crimes but he was quick to dismiss the Suhakam findings as mere “hearsay.” Anything he finds inconvenient or doesn’t fit into his view of how things ought to be he simply dismisses as hearsay or suspicions or not quite right.

Mahathir’s arguments that Malaysia wants to be friendly to all, that we can gain economically from better relations with North Korea makes no sense either. North Korea has a barely functioning economy with little or no foreign exchange to engage in any meaningful bilateral activity.

As for good relations, why would we even want to be friendly with a rogue nation that has become a serious danger to international peace and stability, that continues to threaten nuclear armageddon on South Korea, one of our oldest and closest friends?

As well, prior to the assassination, North Korea successfully turned Malaysia into one of its most important bases of operation in the region from which to carry out clandestine activities, circumvent UN sanctions and engage in all manner of illicit enterprises to earn hard currency for its nuclear programme. There can be little doubt that they will quickly revert to their old ways once relations are fully normalized.

All told, Malaysia has absolutely nothing to gain and everything to lose from closer relations with North Korea. What’s more, the very idea of developing good relations with  such a murderous regime must surely be a mockery of the very ideals and aspirations of Malaysia Baru. The prime minister does us all a disservice when he pushes such irreverent foreign policy initiatives.