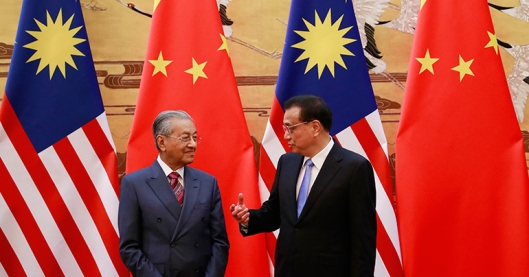 As the Pakatan Harapan government draws closer to making a final determination on the East Coast Rail Link (ECRL), a campaign appears to be gathering momentum to pressure the government to revive Najib-era Belt and Road (BRI) projects.

Late last month, MCA president Wee Ka Siong, one of Malaysia’s most ardent BRI supporters, addressed an open letter to the Prime Minister and members of the cabinet warning that the sky would fall down if BRI projects were cancelled.

In his letter, Wee spoke of nightmare scenarios that would “leave a trail of damage” if the ECRL project was cancelled – diplomatic relations with China imperilled, FELDA settlers impoverished, further economic loss for the east coast, heavy financial penalties and damage to Malaysia’s international reputation. Quite a litany of havoc for just one project.

Anbound Research Centre, a well-funded Chinese government-linked firm with offices in Kuala Lumpur took aim at Dr Mahathir, opining that his views on China were hopelessly stuck in the past. The Malaysia-China Chamber of Commerce (MCCC), an early BRI cheer-leader insisted that projects like the ECRL and the Malacca Gateway are critical to Malaysia’s economic competitiveness and maintaining good relations with China.

Criticisms of and concerns about BRI projects were dismissed as misinformation, miscommunication or misunderstanding. Concerns about the impact of massive borrowing from China, for example, were shrugged off as “nationalist political rhetoric.” Indeed, they seem to argue that the current difficulties have more to do with internal politics than with the projects themselves.

The message from Beijing and its local wingmen is clear: China considers BRI-related projects, especially the ECRL, critical to its overall regional plans and wants to see it continued come what may. It is willing to make some adjustments – reduce the scale of the projects, defer completion dates and renegotiate some of the terms, but the projects themselves must continue or the threat scenarios so graphically conveyed by Wee will come to pass. Such is the vice we are now caught in thanks to Wee and his BN colleagues.

The campaign to whitewash and resuscitate BRI projects conveniently glosses over all the issues that made them controversial in the first place, like the complete absence of studies to show that the projects are justified and economically viable. Apologists for China keep insisting that projects like the ECRL are a “necessity” but offer no evidence to support their claims.

Likewise, with the Malacca Gateway project. The MCCC quotes a figure of 100,000 ships (70,000 of them Chinese) traversing the Straits of Malacca annually and uses that to justify the project. Absent, of course, are actual feasibility studies; throwing random data around cannot be a substitute for a proper assessment of the project’s viability.

Other concerns like grossly inflated prices and terms which are heavily tilted in China’s favour are also sidestepped. Wee, for example, had nothing to say about some of the peculiar payment arrangements for the pipeline project which resulted in 90% of the project’s value being paid out to PRC contractors when only 13% of the work had been completed.

As we now know, many of the BRI-related projects were simply part of a grand scheme to defraud Malaysian taxpayers by diverting money to cover 1MDB-related losses as well as pad the bank accounts of cronies. While China may not have profited directly from such corruption, there is no way that it could not have known what was going on, particularly as China’s Exim Bank was closely involved. It is not unreasonable to conclude, therefore, that China chose to ignore obvious signs of fraud in order to advance its own strategic interests vis-à-vis Malaysia.

China is, of course, our most important economic partner; no one will dispute that it is in our national interest to keep relations on an even keel. The first responsibility of any government, however, must always be to prioritize its own national interests.

At the end of the day, each project will have to be rigorously assessed on its own merits; if it serves our interests, if it is affordable, if it makes sense to borrow from China, if the terms are good, the PH government will have no reason not to go forward with it.

Blindly parroting Beijing’s line even when caution dictates greater circumspection does nothing to help Malaysia extricate itself from the mess we are in. Perhaps if Wee had used the vast experience in project management he boasts about to defend the interests of the people of Malaysia when he was in government, we would not be in such a vulnerable position today.

Judging from his comments, Dr Mahathir’s message to China was simply this: while Malaysia values good relations and wants to work with China to overcome all the issues left over from the previous administration, it can never be at the cost of our sovereignty and national interests. We have seen (in Sri Lanka and elsewhere) what can happen when nations fail to be vigilant and are determined not to let anything like that happen here. That’s not being stuck in the past; it’s being grounded in reality.