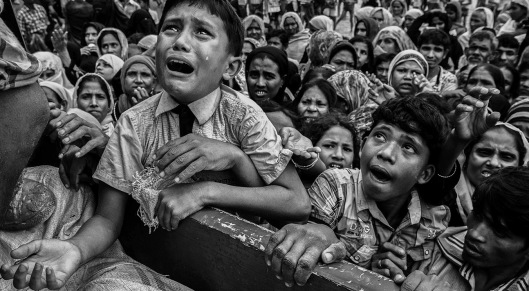 In New York last week, Prime Minister Dr Mahathir Mohammad added his voice, not for the first time, to the growing international chorus of condemnation against the government of Myanmar for its genocidal attacks against the Rohingya.

Myanmar’s military has, of course, a long and well-documented history of oppressing its minorities. Forced labour, rape, torture, pillage and murder have been the weapons of its warfare. A vast diaspora of refugees from Myanmar is now scattered across the globe.

The  Rohingya, in particular, have been subjected to ever-increasing levels of violence that, according to the UN, clearly amount to crimes against humanity. Thousands have been systematically rounded up, killed, raped, tortured and forced to flee across the border to Bangladesh. More than 700,000 Rohingya refugees are now living in squalid refugee camps along the Myanmar-Bangladesh border.

Their situation is grim and appalling; the international community is finally beginning to mobilize against the government of Myanmar.

As welcome as the rising international outrage against the genocide in Myanmar is, it is clearly not going to be enough. A more concerted campaign is urgently needed.

It is now incumbent upon the Pakatan Harapan government to immediately find ways to give greater substance to Dr Mahathir’s UN speech by following up with policies and initiatives to help the Rohingya.

Malaysia has, of course, been active on the issue pressing both ASEAN and the wider international community to take effective measures to assist the Rohingya. Malaysian teams are also on the ground along the Myanmar-Bangladesh border providing medical and humanitarian relief. In addition, Malaysia already plays host to more than 150,000 Rohingya refugees. So it’s not all talk, at least as far as Malaysia is concerned.

But this is now an issue that requires a more concerted international response. Malaysia needs to rise to the occasion once again (as it did when genocide reared its ugly head in Bosnia) by leading a global effort to end the genocide in Myanmar and provide urgently needed humanitarian assistance and support for Rohingya. As well, Malaysia should galvanize support to exert maximum pressure on the government of Myanmar to accept a political settlement that would enable the Rohingya to return home with all their rights guaranteed by the international community. And last but not least, to  bring to justice those responsible for crimes against humanity.

Malaysia is, in fact, uniquely placed to play such a role given our strong links with the UN, OIC, ASEAN, EU and others. The presence of a sizeable Rohingya refugee community in Malaysia also gives us some credibility to speak on the issue.

For a start, the government should immediately appoint a special envoy to help coordinate a global response to the crisis. And who better than Anwar Ibrahim himself.  After all, he does not at the moment have any specific governmental responsibility; he has a great deal of experience and is well-connected and well-regarded internationally.

He would, therefore, be ideally suited to take on this important humanitarian task.

Also, as Charles Santiago (Member of Parliament for Klang) has pointed out, the  government must do more to help the Rohingya refugees who are already here by affording them better protection, support and skills training.

It should also move quickly to implement long-standing proposals to allow eligible refugees to work in Malaysia, especially given the labour shortages that certain sectors of our economy still face.

Here again, Anwar, as a soon-to-be member of parliament, can help structure a more effective and compassionate response to refugees already here.

Malaysia now has a new government that is committed to building a gentler, kinder, more inclusive nation premised upon respect for human rights and human dignity. Dr Mahathir has made a forceful statement on the Rohingya issue at the UN. It’s time for the rest of the government and the nation to get behind him on the issue both at home and abroad.

We didn’t do much when Myanmar’s Christian minorities were being persecuted. We said nothing when groups like ISIS terrorised, slaughtered and evicted thousands of Christians and other minorities in the Middle East. Even now, we are not as vocal as we should be on the war crimes being committed against Yemen.

Malaysia Baru must define itself as that nation, small though it is, that will hear the cry of the wounded, the oppressed and the hurting irrespective of their ethnic origin or religious background. Of course, we cannot solve all the problems of the world but that should not stop us from doing whatever we can to help.