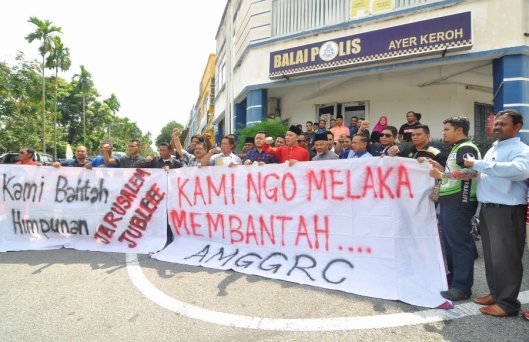 Following the rise of mob groups like the Red Shirts who pursue their political agenda against minorities through threats and intimidation, are we now seeing the rise of religious mobs out to impose their will in a similar manner?

It is an important question to ponder following the Jerusalem Jubilee affair – a small church-organized event in Malacca which suddenly grew, in the febrile imagination of PAS officials, into a sinister Zionist plot against Islam, an extreme provocation, a challenge to the sensitivities of Muslims, a threat to national harmony and an attack on the Federal Constitution, all at once.

Although the organizers of the Jerusalem Jubilee event could have been more circumspect with regard to their choice of themes and symbols, given how easily such things can be misunderstood in non-Christian cultural settings, particularly one rife with bigotry, the event appears to have been deliberately exploited by PAS and used as an opportunity to vilify Christians.

The same PAS officials who manufactured the outrage against the event went on a verbal rampage denouncing evangelical Christians as “aggressive and cunning” and accusing them of “plotting to take control of the country’s politics.” And if that was not bad enough, they added that evangelical Christians “are extreme and antagonistic towards Islam… [and] threaten the Islamic way of life.”

It’s an extremely damning and hateful indictment of Christians, as close as one can get to declaring them enemies of the faith without actually using the Islamic term for it, as the Pahang Mufti did last year. The implications are, of course, too shocking to contemplate.

Government officials, for their part, quickly joined the parade. The Deputy Prime Minster promptly ordered the event cancelled while the state’s chief minister made much of the fact that the church had not applied for permission to hold the event, never mind that churches do not need a permit to hold a church event within their own premises.

In other countries, such slanderous allegations against another faith would have been speedily disowned, but here, its purveyors quickly achieve a measure of fame.

Unsurprisingly, this kind of rhetoric and incitement has led to increasing hostility against minority faiths particularly Christians who are demonized and vilified on a regular basis.

Worryingly, much of the invective against Christians that we are now hearing in Malaysia is similar to the kind of invective that we hear coming from ISIS.

It is this kind of incitement and hostility, much of it Wahhabi inspired no doubt, that radicalizes societies and sets the stage for the persecution and slaughter of Christians, and the abduction and disappearance of pastors, that are now commonplace in countries like Egypt, Syria and Iraq.

If our security officials want to understand why so many young people go off to join ISIS and other violent radical groups, they need look no further than the culture of religious intolerance and hate that is being perpetuated right here at home.

The police, who ought to be faith neutral, must also rethink their own participation in seminars that malign Christians and treat them as threats to national security.

It is also strange that PAS leaders consider references to Jerusalem or Jews in Christian literature or themes as something sinister.

Do they not understand that Christianity is one of the three Abrahamic faiths and is, therefore, rooted in Jewish culture, history and religion?

Jesus took on Jewish identity. All our prophets including Abraham, Joseph, Moses, David, Isaiah, and Jeremiah were Jews. The Torah, written in Hebrew, is part of our Bible. Jewish festivals like Passover and the Feast of Tabernacles are celebrated by many Christians too while Jewish symbols like the menorah (used in the Jerusalem Jubilee poster) have significance for Christians as well.

It is part of our spiritual identity as Christians, it is what makes us “people of the Book.”

It doesn’t make us any less Malaysian and neither does it make us anti-Islam. We appreciate that the majority of our fellow citizens have a different belief system and, of course, we want to be sensitive to and appreciative of their faith while always remaining true to our own.

Support for the Palestinian people

It also doesn’t mean that all Christians support the government of Israel or share its Zionist agenda. In fact, many Christians have been in the forefront of promoting the two-state solution and fighting for Palestinian rights because they care deeply about the plight of the Palestinian people. And let’s not forget that many Palestinians are Christian too.

All the posturing about Palestine and Israel is, in fact, little more than hypocrisy, another convenient excuse to stir up animosity against Christians.

The wider question that needs to be asked, however, is this: is sensitivity and tolerance a one-way street?

When the Deputy Prime Minister demanded that “all parties respect other religions and maintain mutual religious tolerance,” as he did recently, is it just for the benefit of one faith or is it truly for all faiths in keeping with our constitution and the multicultural composition of our nation?

Going by recent events, it doesn’t appear to be so. Other faiths are expected to be ever mindful of Muslim sensitivities but there appears to be no corresponding obligation on the part of groups like PAS to do likewise. They are free to insult and incite at will while Christians and others are obliged to be sensitive and servile.

Imagine the uproar and the indignation that would ensue if a Christian leader levelled similar accusations against Muslims or followers of other faiths. He would be unequivocally condemned by all decent Malaysians, and rightly so. Why is it then acceptable for PAS to say such things about Christians and get away with it? Are their feelings the only ones that matter?

Where are we headed?

The Jerusalem Jubilee affair is also indicative of where things might be going in the near future.

PAS leaders argued that the event shouldn’t have been held in Malacca because Malacca is 64% Muslim and only 4% Christian.

Going by such rationalization, Christian events would have to be confined to only a very few places since Muslims outnumber Christians almost everywhere in the country. Such arguments have been used to restrict the building of churches; are they now going to be applied to Christian events as well in an effort to further limit Christians from practising their faith?

The fact of the matter is that PAS will always make much of such issues because they have little else to offer as a political party.

It is yet another reason why many Malaysians will never vote for PAS because a vote for PAS is a vote for intolerance and the continued harassment of non-Muslim faith groups.