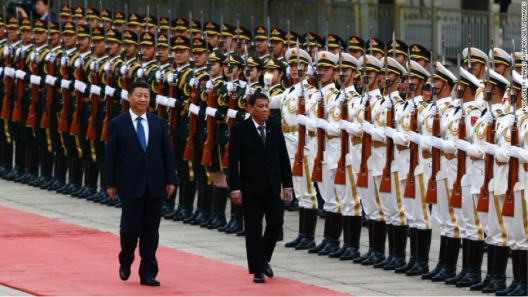 Philippines President Rodrigo Duterte’s revelation last week that President Xi Jiping warned him that China was prepared to go to war with the Philippines over its dispute in the South China Sea must surely have come as a rude awakening to the region’s leaders.

According to Duterte, China threatened war if Manila attempted to act on last year’s Hague tribunal ruling or begin exploring for oil and gas in the area of Reed Bank or the West Philippine Sea which is also claimed by China.

The Hague tribunal, in a landmark ruling last year, essentially rubbished China’s claims to much of the South China Sea based on its so-called nine-dash line. China furiously rejected the tribunal’s findings and successfully bullied ASEAN into distancing itself from it.

For decades, China has insisted that it is committed to peaceful negotiations in the settlement of disputes and emphasized its desire to maintain good neighbourly relations with Southeast Asian nations.

At the same time, China has made negotiations on a so-called Code of Conduct (COC) to resolve maritime disputes in the South China Sea the centrepiece of its diplomatic strategy in dealing with ASEAN.

Instead of seeing the COC for what it is – an essentially meaningless diplomatic exercise by China to buy time as it develops its military options – ASEAN continues to hope that the COC will somehow restrain China.

Malaysia’s foreign minister, for example, recently stated that negotiations on the COC were heading in “a positive direction” and that “even though [the COC] was not legally binding… it is the only method that we can use to maintain security and order in our region.”

If the COC is ASEAN’s best hope, it’s game over for the region.

Regional capitals will now have to adjust to the new reality of dealing with a China that is confident enough to dispense with diplomatic niceties and act more assertively vis-à-vis neighbours.

And it’s not just the threat of war but the way China is now playing hardball with its neighbours when it does not get its way.

Witness the humiliating treatment of Singapore at last week’s OBOR conference in Beijing. By deliberately excluding Prime Minister Lee Hsien Loong from the region’s biggest and most important gathering, China was sending a warning to its neighbours to toe the line or suffer the consequences.

Beijing has also not held back from using its economic leverage against the Philippines (South China Sea issue), Mongolia (visit of the Dalai Lama), South Korea (THAAD) and Taiwan to punish them for policies it didn’t agree with.

Several factors have contributed to this more assertive posture.

For one thing, the United States, which has always provided a strong regional counterweight to China, is now too distracted by internal disarray to provide any kind of meaningful leadership in the Asia-Pacific.

With both the “pivot to Asia” and the TPPA dead, there is structurally nothing left to mitigate China’s push for regional dominance.

China’s rising military strength is also a factor. Though the US still outspends China three to one, China’s defence spending has risen sharply and is now almost 13% of GDP (or USD 215 billion in 2016). China currently spends almost as much on defence as Australia, Japan, South Korea, India and ASEAN combined.

With naval and amphibious capabilities and newly established air and naval bases in the South China Sea, it is finally able to project its power into the region in a more significant way.

On the economic front, every single ASEAN nation is now dependent on China in one way or another. Almost all of the region’s resource-based industries and its tourism and hospitality industries, for example, are heavily dependent on the China market.

As well, China is also the region’s main source of foreign investments and infrastructure loans with billions of dollars in the pipeline. For investment-hungry ASEAN nations, there is simply no one else who can match China these days.

Given this dependency, China is too big, too important and too risky to offend even when key strategic interests are at stake.

One by one, regional strongmen are buckling under pressure from China or worse still, being bought off by dubious projects that offer maximum opportunities not for growth but for corruption.

Such is the stranglehold that China now has over ASEAN that its leaders continue to sing China’s praises even as they are being taken to the cleaners. President Duterte, for example, described China’s threat of war as “friendly advice” and then went on to mull a USD 500 million arms purchase deal with China.

Reports now suggest that China is privately ramping up political and economic pressure against Malaysia to agree to joint exploitation of fishery and mineral resources in Malaysian waters claimed by China. Beijing has been pushing similar initiatives with both the Philippines and Vietnam and touting it as a possible win-win situation.

With Putrajaya desperate for a Chinese bailout of its scandal-plagued 1MDB portfolio and financing for several dubious investment projects on the line, the stakes will be high.

Agreeing to China’s demands, however, would be a major setback for Malaysia; it would legitimize China’s claims to what is now Malaysian territory and award an equal share in all mineral and ocean resources to a country which, as the Hague tribunal has ruled, has no legitimate rights in the area.

After dithering for so long, ASEAN has no good options left.

It can either face up to China and suffer the consequences or accede to China’s demands for at least shared sovereignty and equal rights to all resources in the South China Sea despite the Hague tribunal’s finding that China’s nine-dash line has no legitimacy.

Perhaps, that has been China’s strategy all along: aggressively pursue exaggerated and excessive maritime claims to such an extent that its smaller neighbours will consider it a victory if they get to keep half of what they already own.

It would be the ultimate art of the deal!