The BN government seems to have a penchant for putting Malaysia in the international spotlight for all the wrong reasons. This time Malaysia is being widely criticised for the way it colluded with Turkey to detain and deport suspected opponents of the Erodogan regime.

Last week, three long-time Turkish residents of Malaysia – school principal Turgay Karaman, businessman Ihsan Aslan and academic Ismet Ozcelik – were surreptitiously detained and hastily bundled out of the country before their families could even mount a legal challenge.

The whole manner in which the authorities handled the matter – the secretive way they were detained, the constantly changing reasons for their detention, the speed at which they were deported, the presence of Turkish agents – was deeply troubling.

Colluding with the Erdogan regime

It is now clear that their arrest and deportation was in response to pressure from the Turkish government.

Since the unsuccessful coup in Turkey last year, Turkish president Tayyip Erdogan has been on a witch hunt against anyone remotely connected with his political nemesis, the US-based cleric Fethullah Gueln. Thousands of military personnel, teachers, civil servants, judges, reporters and others have been summarily detained or dismissed. Turkish agents have also targeted Turkish nationals living abroad, many on spurious grounds.

While many countries have expressed alarm at Turkey’s slide towards authoritarianism, Malaysia apparently has no compunction collaborating with the regime.

The Home Ministry’s insistence that it acted on its own to deport the aforementioned Turks because they were “members of an organization deemed illegal in their country” is disingenuous to say the least. 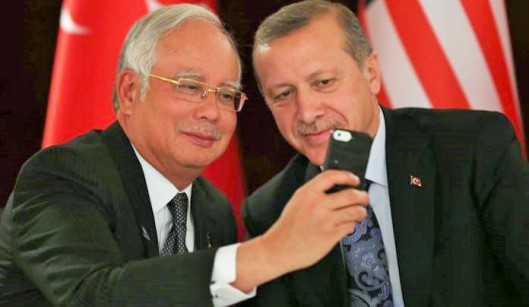 This is, of course, not the first time that Malaysia has engaged in dubious extraditions.

In 2004, Libyan national Abu Abdullah al-Sadiq and his then pregnant wife, Fatima Bouchar, were arrested in Kuala Lumpur, detained for 13 days and then transferred to CIA facilities in Thailand under the now infamous rendition programme. In Thailand Abu Abdullah was tortured before being sent back to Libya where he spent years in prison.

Cynically, while Malaysia was publicly critical of the US war on terrorism, it was quietly cooperating with the CIA in extrajudicial renditions.

In 2012, a Saudi journalist, Hamza Kashgari, accused of insulting the Prophet, was detained while on transit to New Zealand. Despite not having a formal extradition treaty with Saudi Arabia and notwithstanding a high court injunction against his extradition, he was sent back to Saudi Arabia.

Since 2011, Malaysian police have also been quietly working with Chinese authorities to round up and deport Muslim Uighur refugees fleeing the on-going crackdown in Xinjiang province. Many of these refugees had registered with UNCHR and were awaiting for their claims to be reviewed when they were deported.

It is more than likely that many others may have also been clandestinely detained and dispatched to uncertain fates in unknown destinations.

Transparent rather than secretive

No one is, of course, suggesting that suspected terrorists should not be deported or extradited. Malaysia has an obligation to cooperate with other countries in the apprehension of terrorists and criminals. What is important, however, is for the process to be open and transparent rather than secretive and ad hoc. And, of course, the decisions of the government should always be subject to judicial review.

In April this year, for example, an Iranian national accused of involvement in the 2012 bombing in Thailand was extradited after his case was heard by the Federal Court. Surely that is the way a civilized country does things.

A dumping ground for terrorists

Interestingly, while we oblige Turkey by doing their dirty work for them, they repay the favour by quietly facilitating the passage to Malaysia of known terrorists, as was reported recently. We have apparently become the dumping ground for terrorists that Turkey apprehends. With friends like that, who needs enemies?

In the meantime, while the government deports Turks whose only crime may be their dislike of Erdogan, it opens its arms wide to people like Zakir Naik, an extremist preacher blacklisted by several countries for spreading hatred, funding terrorism and money laundering. India has now requested for an Interpol red corner notice against Zakir, which, if granted, would make him an international fugitive in the fullest sense of the word. Let’s see how quickly the authorities will act to deport him and even strip him of his undeserved PR status, if he is still in the country.