BERSIH brought out the best in us; it renewed our hope to believe that change is possible

Now that BERSIH 5 is over, the campaign to define it has begun.

BN parties, worried about the BERSIH effect, have embarked upon a Goebbels-like effort to rewrite the history of those few hours when yellow became the colour of our nation.

All sorts of falsehoods, misinformation and disinformation are being put out about what BERSIH stands for, who and how many attended, why they attended, what transpired that day and what was achieved. In the process, they are demonizing, discrediting and delegitimizing the people who participated.

We are being told, for example, that Saturday’s rally was a riot, that Bersih supporters were confused or clueless as to why they were demonstrating, that they felt exploited by opposition politicians, that it was largely a gathering of DAP [read Chinese] supporters, that participation was mostly confined to so-called urban elites, that no more than 15,000 attended, that it was an attempt to overthrow the government.

For all these reasons, they would have us believe that Bersih was a failure, a non-event, an insignificant gathering of rabble-rousers and troublemakers.

There are none so blind as those who will not see.

Defying threats and intimidation, harassment and disruption, and the very real possibility of violent attack, tens of thousands of ordinary citizens flooded the streets of Kuala Lumpur and other cities in support of BERSIH.

They came with an unambiguous message to a government that has long since broken faith with its people – they want a government that upholds our constitution, that is committed to democracy, good governance and transparency, that respects the voice of the people, that puts their interests ahead of the cronies and fat cats.

Malaysia in all its hues and colours

And what an eclectic mix they were: Malays, Chinese, Indians and Orang Asli; Muslims, Buddhists, Hindus, Christians; professionals, traders, hawkers, students, farmers, retirees. They came from every state, their respective state flags, and of course, the Jalur Gemilang fluttering in the wind.

Some are insisting that it was largely a Chinese affair but that is a lie that disenfranchises the thousands of Malays who were present and who came in defiance of both UMNO and PAS as well as the religious establishment.

To see Malaysians marching together as one was truly inspiring. We have our differences, of course, but there was a unity of purpose, a sense of brotherhood, a shared pain over the sad plight of our nation.

It was Malaysia in all its hues and colours, strong, proud and free. It showed us what could be, what we ought to be. Only those whose power rests on dividing the nation, of playing off brother against brother, would find nothing to rejoice about such a gathering.

A mockery of truth

The atmosphere too was remarkable. People chanted and sang and laughed together. With the support of the police (who did an outstanding job keeping us safe), the rally was peaceful, respectful and orderly. And there was courtesy, kindness, respect, civility – something that those in power have largely forgotten.

To call it a riot, an attempt to undermine parliamentary democracy or accuse its leaders of plotting to illegally topple the government is to make a mockery of truth, to call good evil and evil good.

Of course, we were there to press for change; citizens in a democracy have the right to peacefully vent their frustrations over the abuse of power, misgovernance and corruption, to tell the Prime Minster that they have lost confidence in his leadership.

Only in authoritarian regimes is that considered subversive or unlawful.

In any case, both the courts and the Malaysian Human Rights Commission (Suhakam) have consistently upheld this fundamental right to protest. SUHAKAM, in fact, emphasized that Saturday’s gathering was by no means illegal and that “participants conducted themselves in an acceptable way, not threatening public order and the security of the country.”

Tip of the iceberg of discontent

Much is also being made about the numbers – that there were less this time around compared to previous BERSIH rallies – but BN shouldn’t be too quick to gloat. Bersih is more than a numbers game. Those who turned up were but the tip of the iceberg of discontentment and anger. For every single person who marched on Saturday, a hundred more were at home cheering them on, marching with them in spirit, sharing their frustration, believing in their dream for a better nation.

We’ll yet hear from them come election day.

BN leaders also give the citizens of our country far too little credit, esteem and respect when they assert that most rally-goers were clueless about BERSIH’s goals.

Ordinary citizens may not be as sophisticated as some of these BN elites but they understand enough to know that the country is in a mess, that unbridled corruption is destroying us, that all the race-baiting and religious extremism is pushing the nation towards the brink, that the abuse of power is turning our country into an ugly dictatorship.

They are hard pressed, and they were there Saturday to tell the government of their pain.

Whatever it is, the harsh reaction of the government, was totally unwarranted. As SUKAHAM itself noted, there was simply no justification for the arrest of BERSIH leaders. It was an abuse of power, plain and simple.

Seldom has the state expended so much of its resources or brought so much of its power to bear to deter a peaceful gathering of citizens seeking to exercise their democratic rights.

Even that was apparently not enough for some politicians. The leader of a once-progressive political party accused BERSIH of being “out of control” and urged the government to bring back the Internal Security Act to deal with BERSIH supporters.

There’s simply no telling how low such morally-bankrupt politicians will go. 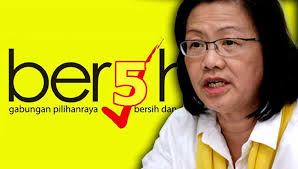 Worst of all, however, was the arrest of the heroic and courageous BERSIH leader, Maria Chin Abdullah, under SOSMA, the draconian anti-terrorist act, a new political low even by BN standards.

And now Maria is being made out to be some sort of a sinister supervillain heading a foreign-funded, CIA sponsored, ISIS-infiltrated network working in tandem with an assortment of apparently dangerous civil society groups like election monitors, Sisters in Islam and feminist NGOs to terrorize the nation.

It’s laughable really if not for the fact that a grave injustice is being committed against a true patriot and a great Malaysian.

The harsh treatment of Maria smacks of vengeance more than anything else. Malaysians will not soon forget so great an injustice.

As well, it makes the struggle for democracy and accountable government all the more urgent and justified.

BERSIH brought out the best in us

Whatever may be said about BERSIH, one thing is clear: it brought out the best in us. It inspired a great many Malaysians to reach beyond the narrow and petty divisions that have divided us. It taught us that the dream of our founding father, Tengku Abdul Rahman, of a progressive constitutional democracy, united in diversity, is not as forlorn as they would have us believe.

The road ahead may be long and arduous but BERSIH gave us hope to believe that change is possible and it inspired us to press on.

For now, at least, that is enough. And they can’t take that from us.