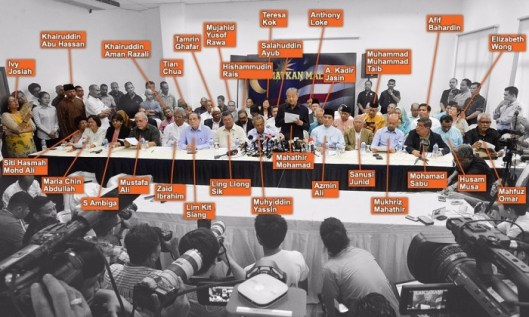 Last week’s remarkable gathering of political and civil society leaders and the “Citizen’s Declaration” they signed continues to reverberate across the political landscape.

That opposition and civil society leaders who participated in the gathering now feel obliged to justify if not defend their decision to join Dr Mahathir Mohamad in his quest to oust Prime Minister Najib Tun Razak says something about how controversial it has all become.

The day after tomorrow

There is, of course, no argument that Najib has been disastrous for the nation. All but a few self-serving cronies and an assorted coterie of hangers-on are united in the view that Najib should be pressured through whatever democratic means available to step down as quickly as possible.

It is what comes next that is the fly in the ointment.

Those who joined Dr Mahathir last week insist that the immediate priority is to get rid of Najib because the country can no longer endure his maladministration. While few would dispute that, many are equally suspicious of Dr Mahathir’s motives.

What is Dr Mahathir fighting for?

Has the éminence grise of Malaysian politics undergone a Damascus road experience and come out convinced that only drastic change can save the nation or is he being as Mahathirian as ever, seeking to exploit public discontent purely to further his own political agenda? Is his goal democratic transformation or merely the continuation of UMNO’s hegemonic rule under a more competent and pliable leader?

When questioned about Dr Mahathir’s motives, many of the participants sought to sidestep the issue in the interest of creating a united front against Najib. One signatory even dismissed such concerns as “irrelevancies of the moment” while others urged the public to focus on the big picture.

Alluding to these concerns, Dr Mahathir himself would only say that it was something that politicians could fight about later.

The general public, however, appear unconvinced. They have harboured hopes for change for too long to now acquiesce in political games and they baulk at following even trusted leaders like Lim Kit Siang without a more convincing road map for change.

They have good reason to be wary.

Throughout his long and bitter campaign to dislodge Najib, Dr Mahathir has consistently argued that he is fighting to save UMNO and ensure its long-term survivability, something that both UMNO deputy president Muhyiddin Yassin and former Kedah Menteri Besar Mukhriz Mahathir reaffirmed just days after the signing ceremony.

Even Dr Mahathir’s resignation from UMNO was not a rejection of the party per se but a dramatic manoeuvre to pile pressure on Najib to leave.

Dr Mahathir also does not appear to be a man with second thoughts about his past policies and actions. In fact, he has never admitted to his own culpability for the sorry state our nation is in today. Judging by his many statements since he resigned as prime minister, he appears to see his years in office as a sort of golden era to which we must return.

The only mistake he admits to is his poor choice of successors but that is little consolation.

Furthermore, he has given no indication whatsoever that he is ready to embrace the kind of democratic values that so many want so much to see established in our nation. Indeed, he has always believed that democracy is vastly overrated and that a developing country like Malaysia needs a strong, almost absolute leader at the helm; just not the present one.

He is no democrat and he has never pretended to be one.

And then to have some of the other unrepentant engineers of our present plight seated smugly at the table passing themselves off as would-be reformists and saviours, as if yesterday didn’t exist, was simply, I suspect, too much to swallow for many people.

Scraps from the table

Dr Mahathir’s only concession to democracy at last week’s meeting was a passing reference, towards the very end of the declaration, to constitutional rights and freedoms, all stuffed into a mere two of the thirty-six paragraphs of the declaration.

Cynics would undoubtedly see it not as a change of heart but a clever tactical concession to win over his detractors.

But such is Dr Mahathir’s charisma, force of personality and political standing that when he summons the nation to battle, even his most implacable foes feel obliged to respond notwithstanding their reservations about him.

Anwar Ibrahim, for example, who has been so horribly and shamefully treated by Dr Mahathir, graciously reached out from his prison cell to endorse the doctor’s initiative in the interest of the nation.

And such is the depth of despair and angst in our nation today that people with unquestionable integrity who have struggled long and hard and have made enormous personal sacrifices to build a better nation are now willing to accept the scraps from Dr Mahathir’s table – a few half-hearted and weak assurances of democratic reform at some future date – in the hope that it will lead to real change.

If Dr Mahathir, however, is unwilling to concede the need for genuine democracy, justice and inclusiveness when he is at his weakest, it is surely too much to expect him to do so when he is once again in firm control of UMNO-BN.

Like it or not, Dr Mahathir carries with him too much baggage from the past to be accepted at face value. It is up to him to convince the nation that he is now acting in its best interest, that he is willing to embrace the kind of genuine democratic principles that alone can guarantee our future.

In spite of all the misgivings Malaysians might have about him, there’s a good chance that the nation will follow him once again if he would but lay before us all a clear path to national redemption.

In the meantime, the call to all Malaysians to unite around Dr Mahathir for the good of the nation is unlikely to arouse a national awakening.

Malaysians might agree, with some reluctance perhaps, to forgive and forget and unite around a meaningful platform for change but not around such an insipid, uninspiring and incomplete declaration.

Nelson Mandela asked his nation to let bygones be bygones on the promise of building a new and democratic South Africa where all are treated with equality and respect. All we are being asked to do at the moment is to support what looks like a campaign to replace one UMNO leader with another cut from the same cloth.

Clearly, if Dr Mahathir and the co-signatories of the Declaration want to generate the kind of unstoppable power for change, they will have to come up with a more comprehensive plan of action.

A road map to the future

What is needed is a clear and uncompromising road map for the restoration of democracy and the renewal of our national institutions. Releasing Anwar Ibrahim from prison and allowing him to resume his political role in the nation is also a must. Unlike so many others at last week’s gathering, Anwar has earned the right to sit at the table.

To be sure, it will be a challenging task and will almost certainly take longer to construct but it will force all parties to agree upon the kind of nation we want to see going forward. And the consensus that emerges from such a meeting of minds will, in all likelihood, be far more enduring.

If the signatories to the Citizen’s Declaration will now take it upon themselves to deepen the discussion on these issues with a view to drawing up a workable road map for change, last Friday’s meeting will come to be seen as a good first step instead of a false start.

And if such a meeting of minds is unattainable, Dr Mahathir’s initiative should be summarily abandoned; we would be better off focusing our efforts on building a more viable coalition to take on UMNO-BN at the next elections.

Our nation is ripe for change. There’s a sliver of hope. Let’s not squander it on the expediencies of the moment.