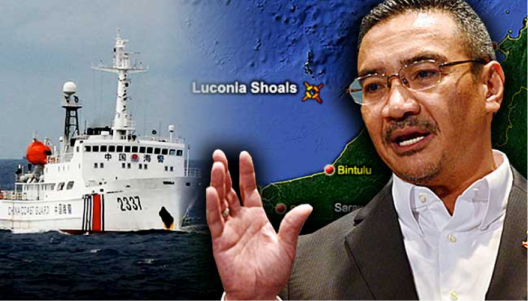 It was reported recently that Chinese coast guard vessels have yet again intruded into Malaysian waters near Gugusam Beting Patinggi Ali (also known as Luconia Shoals), 84 nautical miles off the coast of Sarawak. Local deep-sea fishermen were reportedly avoiding the area after being chased off by Chinese vessels.

The Chief Minister of Sarawak was so concerned about these intrusions that he felt compelled to raise the matter with the Minister of Defence, Hishammuddin Hussein.

A recurring pattern of intrusions

This is not the first time that Chinese naval vessels have intruded into our territorial waters.

In August last year, Shahidan Kassim, minister in the Prime Minister’s department with responsibility for the coast guard, told the press that Chinese coast guard vessels have been intruding into our waters on an almost weekly basis over the previous two years. He added that Wisma Putra had, in response, fired off a series of protest notes to China.

There were numerous other incidents as well, including one in October last year, prompting concern by both the Royal Malaysian Navy and the Malaysian Maritime Enforcement Agency.

Only the most naïve would believe that such intrusions are, therefore, anything but regular, persistent and clearly intentional, part of a wider strategy by China to aggressively enforce its territorial claims in the South China Sea.

Indeed, China has been spending billions developing its coast guard, creating a blue-water navy and building permanent naval and air stations in the Spratly and Paracel Islands from which to extend its reach and strengthen its maritime claims over much of the South China Sea. Latest reports indicate that China has even installed surface-to-air missiles on some of these bases.

The more powerful it becomes, the more aggressively it asserts its claims, prompting growing regional and international consternation.

Other countries seem to have woken up to the real dangers, and the growing potential for conflict, China’s actions present to the region. Malaysia’s leaders, however, appear to be hopelessly lost somewhere between fantasy and denial with regards to China’s intentions.

Nothing epitomizes this more than the reaction of our Defence Minister in response to the latest Chinese intrusions. Instead of giving the matter the serious attention that it deserves, he vacillated and dithered, claiming to want more information about China’s intentions and then denying that any intrusions took place.

And instead of coordinating a more robust response, he risibly offered to help arrange a meeting between the Chinese ambassador and the chief minister! Since when do state governments deal with foreign powers over issues of national sovereignty and territorial integrity?

Both the defence minister and ambassador are now playing down the whole issue, insisting that the matter can “easily be sorted out.”

Well, why then has it taken them so long to do so? Surely all that is needed to settle the matter is for the Chinese ambassador to apologise for the intrusions and issue a clear and unequivocal pledge that his country would respect our sovereignty and cease trespassing into our waters.

Is the ambassador prepared to do that or is he going to duck the issue altogether by giving us yet another spiel about the “special relationship” between our two countries?

Our defence minister, on his part, is also being entirely disingenuous in asking his critics whether we should go to war with China over the issue. Of course, no one in his right mind would want to see the issue lead to open hostilities but that doesn’t mean that we have no other options.

Maritime claims are about establishing and maintaining a strong physical presence in the area and exercising the rights of ownership as much as anything else. This is what China is doing and we need an appropriate response.

China vociferously protests any infringement of its sovereignty, no reason why we can’t do the same. Chinese naval vessels aggressively patrol the waters it claims, no reason why we can’t use some of those expensive submarines, ships and planes we have paid billions to acquire to do the same. Other countries are taking proactive measures to counter China’s maritime claims; we should be doing the same.

It’s not about going to war; it’s about putting up a spirited defence of our territorial integrity through active diplomacy and a strong naval presence.

What is completely unacceptable, however, is the kind of craven response that we are now seeing in the face of such a sustained challenge to our territorial integrity.

Time to get real

Since Tun Razak’s inaugural visit to China in 1974, we have premised our relationship with China on the assumption that if we treat China with “mutual respect”, China will reciprocate and together we can build a peaceful and prosperous region.

On our part, we have dutifully paid our dues – becoming the first ASEAN country to establish diplomatic relations with China, giving China the benefit of the doubt over its support for the Malayan Communist Party and regularly paying obeisance with glowing speeches about the “special” relationship. As well, we put aside our doubts and opened our market, even in strategic areas, to Chinese investments.

All it appears to have done is to convince China that we are an easy mark. The closer we draw to China politically and economically, the more vulnerable we have become to Chinese pressure. The more we celebrate our “special” relationship, the more they take us for granted.

It’s time to get real and see China for what it is – a major partner in regional prosperity but a seriously destabilizing force as well – and structure our national policies in such a way as to maximize the former and minimize the latter.

Strengthen defence ties with our allies

To this end, we need to work more closely with Vietnam and the Philippines, the two ASEAN countries most affected by China’s ambitions in the South China Sea, to forge a stronger consensus within ASEAN on the issue.

For too long we have deluded ourselves into thinking that we are safe from China’s territorial ambitions because of our “special relationship.” We are wrong and we need to face reality.

Secondly, we need to move quickly to strengthen our defence ties with like-minded ASEAN countries, and with the US, Australia, Japan and South Korea, all of whom have a vested interest in ensuring that maritime claims are settled peacefully through bilateral and multilateral negotiations.

We must go beyond mere expressions of concern at international meetings, as Prime Minister Najib is wont to do, and show some real resolve in facing up to the challenge.

President Obama is presently knocking on our doors with his “pivot to Asia” doctrine, so the timing couldn’t be better.

The China card – a dangerous game

Above all else, UMNO itself must be clear about where the national interests lie.

When they look to a country like China to rescue them from the deadly fallout of the 1MDB scandal, they give China extraordinary influence in our national affairs.

And now, they appear to have taken this one step further with the dangerous precedent being set of the Chinese ambassador not only attending, as a special guest, the defense minister’s Chinese New Year open house in his constituency in Johor but, according to news reports, handing out financial assistance to Chinese schools in the minister’s district, something that would have been unthinkable a few years ago.

Is this the beginning of a new partnership between UMNO and China to help keep UMNO in power? Has China, like Singapore, come to the conclusion that its interests are best served by a weak, unpopular and scandal-plagued government in Putrajaya?

After all, if the Saudis can give Najib RM2.6 billion to help him win the last elections, as it is claimed, why should it be unthinkable for UMNO to accept China’s assistance to help secure the ethnic Chinese vote and undermine the opposition in the next elections?

Could this be the reason why our defence minister seems to be bending over backwards to excuse China’s frequent intrusions into our waters instead of standing up for our sovereignty and territorial integrity?

If so, UMNO is playing a dangerous game, one that could seriously destabilize our nation, undermine our sovereignty and render us vulnerable to foreign manipulation and control.