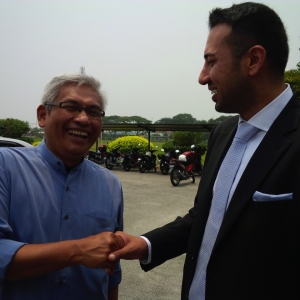 [Comment: When courageous patriots like Dr. Aziz Bari stand up to tyranny and refused to be cowed into silence, the end of tyranny is all but assured. It may not happen tomorrow or even next year or the year after but its days are numbered.

The institutions of our democracy have deteriorated but the spirit of democracy is still strong in Malaysia.

I salute the courage and patriotism of men like Dr. Aziz Bari. ]

SABAK BERNAM, Oct 1 — Constitutional expert Dr Abdul Aziz Bari vowed today never to be cowed into practicing self-censorship despite the prospect of facing charges under the dreaded Sedition Act 1948, saying he is fully aware what “seditious” words are.

The Universiti Selangor (Unisel) law professor pointed out that he was merely doing his job when he recently expressed his expert opinion on the Constitution.

“I don’t think I have to do any of this self-censoring on my part as I’m simply doing my job.

“In fact, I can tell you that I have been teaching this to my students for years,” Aziz told reporters this afternoon after he was questioned for an hour at the Sabak Bernam district police headquarters here.

“I think I’m pretty sure what is seditious and what’s not,” he added.

According to news portal The Malaysian Insider yesterday, Aziz will be investigated under Section 4(1)(a) of the Sedition Act 1948, after almost 100 reports were lodged against him for allegedly insulting the Sultan of Selangor in his published comments.

A police officer who wished to remain anonymous told TMI that there were reports from all over the country against Abdul Aziz for his remarks in two articles published by the portal.

TMI reported that two of its reporters also had their statements recorded on Monday, over the said articles.

“I mean stuff of that nature have been disseminated, discussed and taught to students. Probably something new to the public, but we have been doing this in the classroom for ages.

“So I don’t know what’s going on here,” Aziz said.

The law professor added, however, that he is no newbie to police investigations.

He said he had his statement recorded in 2011 over a “small comment” he made on how the Selangor Sultan had exercised his powers in the raid on the Damansara Utama Methodist Church (DUMC).

Aziz was also suspended by the International Islamic University Malaysia (IIUM) where he was attached to that year, following his comments published in news portal, Malaysiakini, titled: “Aziz Bari: Tidak salah kritik Raja-raja’ (Aziz Bari: Not wrong to criticise the Rulers)”.

After his comments raised an uproar, the academic even received a live bullet threat.

But he said today that despite his repeated run-ins with the authorities, he has remained unperturbed.

“As far as I’m concerned, this is part and parcel of learning.

“From my point of view, I think it is good that we are now having different events which allow us to look at the law and understand it better,” he said, adding that this is also an opportunity to see where the Constitution “has gone wrong”.

Aziz added, however, that Putrajaya’s sedition blitz is making it difficult for people to discuss constitutional matters freely, in an informed and mature manner.

He also expressed worry that upcoming experts with similar specialisation as himself, would start practising self-censorship.

”We citizens should not be allow ourselves to be cowed into silence and fear as this is an attempt to have a climate of fear in this country.

“After almost 60 years of independence, what’s happening is shameful,” he added.

Following Aziz’s investigation, Universiti Malaya’s (UM) student union has also vowed to protest in solidarity with Abdul Aziz, should he be charged for offences under the Sedition Act.