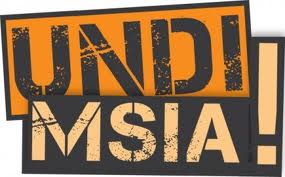 APRIL 27 — Something significant is taking place tomorrow in several cities across Malaysia — ordinary citizens are coming together like never before to stand up for their democratic rights and freedoms, most particularly their constitutional right to free and fair elections.

The occasion is the mass public rally organised by the Coalition For Free and Fair Elections, otherwise known by its local acronym, Bersih (which also means “clean” in the local vernacular). The coalition brings together dozens of non-governmental organisations as well as concerned citizens from across Malaysia’s diverse ethnic and religious spectrum.

This will be the third such protest since 2007 and comes as Malaysia gears up for its 13th general election.

The demand for free and fair elections is rooted in clear and compelling evidence of gerrymandering, electoral fraud, and voter registration irregularities by the Election Commission which has a long history of working hand in glove with the government instead of being unbiased and independent.

The group wants the head of the Election Commission and his senior officers to resign and for foreign observers to monitor the upcoming elections.

The government has made clear that it intends to proscribe tomorrow’s gathering. Both the police and city authorities have declared the gathering illegal and have threatened to forcibly put it down.

During the last Bersih gathering in 2011, riot police attacked demonstrators with chemical-laced water cannons and tear gas. More than 1,000 people were also arrested. In addition, outrageous sexist remarks and threats were made against Bersih leader Ambiga Sreenevasan, the 2009 recipient of the US Secretary of State’s International Women of Courage award.  There were even calls to strip her of her citizenship.

Tomorrow’s protest is taking place within the context of a deteriorating political situation and a mismanaged economy that has left many Malaysians despairing for their future.

Over the last few decades, while the international community has largely looked the other way, Malaysia has quietly drifted towards a corrupt and undemocratic system of governance. Key institutions of state, including the justice system, the civil service and the security forces, have been co-opted and turned into mere appendages of the ruling party in much the same way as other non-democratic regimes have done.

The media is heavily controlled and mostly owned by parties belonging to the ruling Barisan Nasional.

Corruption is rampant. Billions have been lost due to mismanagement, fraud and outright theft. The vast majority of corruption cases are either never brought before the justice system or are insufficiently dealt with. Political connections are everything; justice and accountability mean nothing.

According to the Washington-based financial watchdog Global Financial Integrity, more than US$47 billion (RM141 billion) in illicit money was illegally siphoned out of Malaysia in 2009 alone.

Racial and religious tensions have also been deliberately stoked as part of a strategy of intimidation. Places of worship have been attacked and religious leaders threatened.

In response to public pressure, the government promised to undertake major reforms including the abolition of the Internal Security Act (which allows for indefinite detention without trial) and other repressive laws. To date, however, the reforms have been largely cosmetic and superficial. Even the much vaunted Parliamentary Select Committee on Election Reforms turned out to be big on lofty statements but short on real action and commitment; more games to deceive and delay.

Malaysians are now determined to press for change in a peaceful and democratic manner.

A vibrant though untested opposition that is fully committed to democracy, multiculturalism and peaceful transformation is in place and offers hope that a genuine two-party system might emerge. Such a development is fundamental to Malaysia’s democratic future.

The brave Malaysians who will take to the streets of their nation tomorrow in defiance of their government and in pursuit of their fundamental rights will not be marching alone.

Already, in 70 cities around the world, simultaneous Bersih demonstrations are being planned by Malaysians living abroad.

Malaysia’s friends in the democratic world, including the Commonwealth, must also speak up in support of Bersih’s legitimate demands. Now is not the time to hold back or keep silent and neither must economic or security considerations be allowed to trump support for democracy.

As Edmund Burke once remarked, all that is necessary for the triumph of evil is for good men to do nothing.

Timely international support for the democratic process in Malaysia can have a huge and positive impact on the peaceful change that Malaysians seek to bring about.