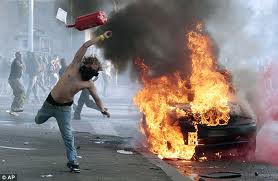 BY ALL accounts, 2011 was a particularly eventful year. Leadership was tested and found wanting, governments fell, economies were shaken, natural calamities wrought huge destruction and uncertainty stalked the planet like never before.

More than anything else, however, 2011 will be remembered as the year when public patience finally ran out and global resentment exploded. Ordinary people fought and protested and tweeted and blogged their rage in unison.

It was a year when young people in particular, empowered and connected via social media and new technologies, and being impatient with an older generation that had squandered their hopes, they rediscovered a passion for social justice and led the charge for change.

To be sure, the heroic Arab struggle for freedom and a better life through most of the year captured headlines in a big way; the Arabs, however, did not march alone.

Across the globe, in democracies and autocracies, in communist and capitalist societies, in religious and secular states, East and West, developing and developed, public dissatisfaction boiled over.

Though separated by circumstance, condition and culture, some common threads were clearly discernible – a collective disillusionment with false promises and fake leaders, a shared anger over the flagrant abuse of power and the blatant and persistent corruption they saw all around them.

Somewhere a line was crossed, trust was broken, credibility was forfeited and faith was lost. Helpless but not hopeless, they took to the streets in defiance of their tormentors and in defence of their rights.

Where there was an absence of respect for fundamental rights, they demanded to be treated with dignity and justice. As Messrs. Hosni Mubarak and Muammar Gaddafi discovered, you can only push people so far before they come to the point where they lose their fear and do the unthinkable. Where there was corruption, they demanded transparency, accountability and an end to impunity.

Whether it was in the United States or elsewhere in the world, people were no longer willing to countenance the immoral enrichment of the few at the expense of the many.

And so they marched, drawing strength and inspiration from each other and united by a sense of shared victimisation.

Though sometimes their protests were hijacked by cheap hoodlums out to trash and loot, or government agents out to discredit and divide, they held together with remarkable fortitude.

In Tunisia, Libya, Jordan, Bahrain, Yemen, Syria and Iran, they marched to demand the right to choose their own government and respect for basic civil liberties.

In Palestine they marched for the right to sit in the United Nations and for the unity of their divided polity.

In Russia they demanded free and fair elections and respect for democracy.

In China they marched for a cornucopia of reasons including corruption, the misappropriation of their lands, environmental degradation and the violation of fundamental civil liberties.

In Latin America, they protested their economic marginalisation and the destruction of their habitat by international mining corporations working in cahoots with corrupt politicians and bureaucrats.

In North America and Europe, they vented their spleen over unemployment, declining living standards, the widening gap between rich and poor, corporate greed and corruption, and endless war.

In Africa they protested against violence and anarchy as well as the deplorable living conditions that has been their lot for decades.

Malaysia too was not immune – people took to the streets demanding greater accountability and transparency, and respect for fundamental human rights.

True to form, ruling elites reacted with warnings of chaos and instability and inveighed against foreign agendas, hidden hands and, of course, the inevitable Zionist conspiracies.

They intimidated, apprehended or tried to appease. They appealed to race, religion or patriotism. And when that failed, they resorted to tanks and teargas, batons and bullets.

In Russia, Prime Minister Vladimir Putin, facing the first real challenge to his rule in twelve years, alleged American interference. In China it was the fault of who else but the Dalai Lama. In Malaysia, Tun Dr Mahathir Mohamad, in vintage fashion, warned of a Jewish conspiracy. In North America, demonstrators were both praised and condemned and then driven from the public square in the interest of public safety, of course.

For all the marching though, much remains illusive. Old regimes have a way of lingering on. Freedom fighters have to learn to turn their swords into ploughshares. Long marginalised opposition leaders have to become adept in the art of governance. The public have to temper their impatience and learn responsible citizenship.

Transitions, after all, take time and are accompanied by many mistakes. The road ahead might be difficult but many will argue that it looks at least a little better than the road behind.

If there are lessons to be learned from all the marching, it is that if people want a better life for themselves, they must get involved, take a stand and remain vigilant. As Mahatma Gandhi, no stranger to civil disobedience, put it, if the people lead, the leaders will follow.

As well, it is a reminder that our best hope for the future lies not in the men who demand our fealty but in the institutions that best guarantee our freedoms – an independent judiciary, a free and fair electoral system, an unfettered media, open and transparent government – and, yes, the right to peaceful protest.